It All Started With The Big Bang

As you might have already figured out, Modern Philosophers, being a writer for a late night TV show has a lot of perks.

There’s fame, fortune, celebrity, and getting to cut to the front of the line at the grocery store.  But those are givens.

This week, I discovered a totally new perk, and I wanted to share it with you.  What I mean is, I want to share the story of discovering the perk.  I don’t want to share the perk itself because you’re not a writer for a late night TV show, so you wouldn’t be eligible.

Sorry if that came across as snooty.  That was the aforementioned fame, fortune, and celebrity talking.

For those of you who don’t know, I write for The Nite Show with Danny Cashman, which is, by far, the highest rated late night talk show currently airing in Maine. 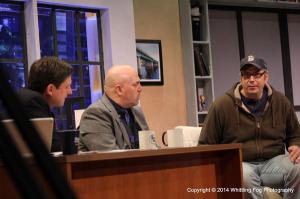 Look, here’s a photo of me appearing in a sketch that I wrote.

I’m playing Timbo the Intern, and sporting my Brooklyn Cyclones hat to give my old hometown a shout out in Maine!

When I’m not busy writing for, or acting on late night TV, I like to watch TV.

The Big Bang Theory is one of my all-time favorite shows.  I was disappointed when the show ended its run this year, but was delighted to discover that the local station that airs The Nite Show was also going to air The Big Bang Theory, from the very beginning, every Monday through Friday at 7:00.

I excitedly set my DVR, and I have been faithfully watching the adventures of Sheldon, Leonard, Penny, Howard, and Raj since we first met them in The Pilot.

As a writer, it’s been an educational experience.  I’d forgotten the early episodes, since they’d first aired a dozen years ago, so it has been like a course in writing for TV to watch how the characters evolved from season to season.

Penny was really tan in Season One, and far more of a ditz.  Sheldon wore some very funky pants, and seemed like a robot.  How in the world were they going to maintain the joke of Raj not being able to speak to women?

Trust me, I have been absorbing each subtle nuance of every episode.  Since I know the show goes on to become a mega hit, it is the perfect project to study in order to learn how to write my own hit TV series.

But then something horrible happened this week to interfere with my education and entertainment.  I kicked off the week with the first episode of Season Three. You remember the episode: the guys come back from spending the summer at the North Pole for Sheldon’s research project.  They’ve all got wildly long hair and beards, except for Sheldon, who sports a neatly trimmed goatee.

I couldn’t watch the next night because the Yankees were on and I worked late, so when I sat down two nights later, I expected to dive into Season 3, Episode 2.  I mean, it’s really the only logical thing to expect.

So I’m there, eating dinner, unwinding after a long day, and Penny refers to Leonard as her boyfriend.  I thought to myself that this was a quick jump, but the last episode had ended with them in bed together, so maybe it was okay.

I was sure something was wrong, however, when Amy appeared in the next scene.  Ummm, what?

I still remembered how the gang went about finding Amy for Sheldon, so how the hell was she already a regular fixture in his life?  I figured the station must have had a programming glitch, so I just deleted the episode.

Of course I deleted it.  I don’t want to know what happens years down the line!  I have to get to that point in their lives organically.

I decided to watch the next episode, as I had two waiting on my DVR.  Almost right off the bat, Howard is talking about being married, and then Bernadette appears.

How am I supposed to learn to properly build a relationship between my characters when my free master’s class on TV writing is suddenly jumping all over the place?

Now if I were just an average TV watcher, I’d be hopeless to rectify the situation.  I’d just have to sit here and watch episodes of The Big Bang Theory in whatever willy nilly order the network decided to throw them at me.

But I’m a writer of a late night TV show, and that comes with perks.

I jokingly sent a message to the network higher up I know from The Nite Show, who happens to be a great guy with a good sense of humor.  Figured I’d just vent and feel better about it.

To my surprise and delight, he wrote back and promised to look into it.  Later in the day, he wrote to me that the problem had been corrected.

Now that is a perk worth having!

And this silly conversation about episodes being run out of order might have led to a meeting today, where important writing type things could have been discussed.

I’m not free to divulge anything right now, Modern Philosophers.

All I can say, however, is that if anything wonderful comes out of today’s meeting with the network bigwig, it all started with The Big Bang…

Native New Yorker who's fled to the quiet life in Maine. I write movies, root for the Yankees, and shovel lots of snow.
View all posts by Austin →
This entry was posted in Humor, Writing and tagged Humor, Maine, Modern Philosopher, sarcasm, satire, The Big Bang Theory, The Nite Show, TV, writing. Bookmark the permalink.

8 Responses to It All Started With The Big Bang