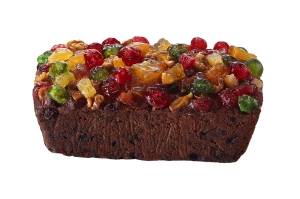 A new Gallup Poll released today reveals that American children are more afraid of  Grandma’s Holiday Fruitcake than they are of Zombies and Algebra combined!

Over 75,000 children from across the country, ranging in age from 7-16, participated in the poll.

When asked the question “What scares you most?”, 41% of the respondents went with the fruitcake.  Most of them followed their answer with “And PLEASE don’t tell Grandma”.

Zombies, the reigning champ for the previous 3 years, received 23% of the vote, while Algebra came in third with 6%.  How do pollsters explain these results?

“We usually conduct the poll in late October, which is right around Halloween and when The Walking Dead starts to air.  Plus, the school year has gotten to a point where Algebra becomes a daily nightmare,” Gallup’s Maura Dahl explained to this Modern Philosopher.  “This year, we didn’t make our calls until the first week of December, which is right around when Grandma’s fruitcakes begin to arrive.”

Are Grandma’s fruitcakes really more frightening than Zombies?  A fruitcake doesn’t want to eat your brain.

I asked renowned child psychologist, Dr. Tammi Barton, if she could explain this fear of Holiday baked goods.  “Are you kidding me, Austin?  Those things are wicked gross.  I mean, I run and lock myself in the room when my Mom tries to get me to have a piece.  They just look all…UGH and BLAH…and I keep picturing my Nana smoking over the bowl while she’s mixing it all up and adding hard candies from the bottom of her pocketbook to the bowl.  It creeps me out!  I’m afraid I’m gonna break a tooth biting into it!”

I should explain that the child psychologist is literally a child, as Dr. Tammi (yes, with an “i” at the end!) is only 12.

So what do you think, Modern Philosophers?

Do you agree with these poll results?  Were you ever that afraid of Grandma’s Holiday Fruitcake?  How do you think Zombies will react when they are told they are no longer American children’s worst fear?

It’s been a long time since I’ve been subjected to a Holiday Fruitcake, but I would love to try feeding some to the local Zombies and see what it does to them.  Just a little something for me to give some Deep Thought to tonight…