Absolute panic broke out all over France tonight, Modern Philosophers, as French citizens ran for cover from what they believed to be an aerial bombardment.

Streets quickly emptied.  Buildings were shuttered.  All of France seemingly rushed underground at the same moment.

“The Germans just won the World Cup.  Again they think they are unstoppable.  Please save us!  Save France!” screamed a highly decorated French soldier as he fought his way down the street in search of cover.

The gutters were littered with abandoned berets and baguettes.  It got so bad that even the mimes were screaming.

“You are American, yes?” asked one attractive woman who stopped running and grabbed my Tricolor toga, which I had specially made to celebrate Bastille Day.

This was answered with great cheers from unseen French citizens, and led to a raucous, severely off-key rendition of The Star Spangled Banner.

The excitement was short lived, however, as the colorful explosions started up again, and the French went back into panic mode.  “Save us please, American GI!” pleaded the beautiful woman, who kissed me before she vanished like all the others.

I tried to explain to anyone within earshot that France was not under attack, and that the loud noises and colorful explosions that lit up the Summer sky were just fireworks being shot off to celebrate Bastille Day.

No one would listen to me, though.  They continued to scream, worry about the advancing German Army, and flee to the tunnels beneath the city.

French President Francois Hollande went on the air to calm his citizens and explain that they were not under attack.  He reminded them that it was Bastille Day, that they always celebrated with fireworks, and that even though the Germans had won the World Cup, he had assurances from German Chancellor Angela Merkel that Germany had no immediate plans to invade France.

President Hollande gave this speech from a secure bunker in a secret location somewhere in France.  He assured his countrymen that he just happened to be at the bunker with key members of the government because that was where they liked to celebrate Bastille Day.

Hollande promised to emerge from his bunker sometime within the next 12 hours, and at that time, he would give another rousing speech to coax the country out of hiding.

As I write this post, I have the streets of Paris all to myself, Modern Philosophers. 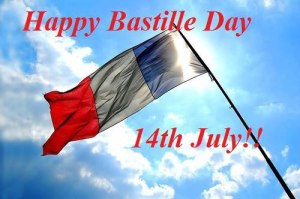 I guess the French just have a hard time forgetting the past, and I suppose it’s always better to be safe than sorry.

I hope they come out of hiding soon, though, so that they can enjoy what’s left of this wonderful Holiday.

Native New Yorker who's fled to the quiet life in Maine. I write movies, root for the Yankees, and shovel lots of snow.
View all posts by Austin →
This entry was posted in Holidays, Humor, Philosophy and tagged Bastille Day, fireworks, France, Germany, Humor, invasion, Modern Philosopher, panic, Sarcasm, satire. Bookmark the permalink.