The House On The Hill Is Under Attack! 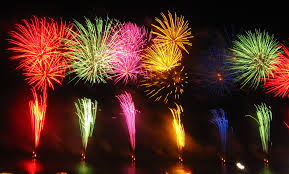 I’m usually a big fan of both my neighbors and fireworks, Modern Philosophers, but last night was the exception.

The House on the Hill has been unusually quiet without Banky, and last night, I was sitting in the living room watching the Yankees game.

Peace and quiet.  Very tense game.  I was at the edge of my couch.

Then the attack started.  It was about 8:15 and the explosions came fast and furious.

I jumped up off the couch, almost spilling Snapple on my toga in the process, and ran to the windows to see who was attacking my home.

I could see the colorful explosions through my dining room window, and they were about fifteen feet from The House on the Hill.  It was also pouring rain, which made it the perfect time to catch me with my defenses down.

The property to the right of mine is a large house that’s been divided into several apartments.  The parking lot of the building runs right next to my house, and there is no fence to divide the properties.  Things can be a little too cozy at times.

Like when the guy they hire to mow the lawn decides to do it at 8AM on Sundays, leaving him right beneath my bedroom window.  Oh joy! 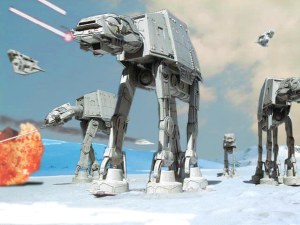 I could see people in the parking lot setting off the fireworks.  At first, it was just the annoyance of loud explosions that sounded like the Imperial Forces had unleashed an AT AT attack on The House on the Hill.

However, the “pyrotechnic experts” next decided to shoot off something that simply sent sparks flying in all directions for about five minutes.

Those sparks were shooting towards the bushes next to my house.  Thankfully, it was raining, which had the greenery soaked and less likely to burst into flame, but I was still not a fan.  It’s one thing to make noise and cause a disturbance, but it’s entirely another to put my home and my safety in danger.

So I called the Police.  The dispatcher informed me that while it was legal to set off fireworks until 10pm, it was illegal to do so within city limits.  She agreed that 15 feet from my house definitely constituted the city limits.

The Police showed up soon after.  The Imperial Forces has scrambled their AT AT battalion by then, but at least there were no more explosions last night.

I have nothing against fireworks, but I prefer them to be handled by experts and far, far away from The House on the Hill.

This is usually a very quiet neighborhood, and I don’t see why folks would go out of their way to disturb peace.

This is Maine after all, not a crazy city like New York!

Any thoughts on fireworks and noisy neighbors, Modern Philosophers?

Native New Yorker who's fled to the quiet life in Maine. I write movies, root for the Yankees, and shovel lots of snow.
View all posts by Austin →
This entry was posted in Humor, Philosophy and tagged AT AT attack, fireworks, Humor, Modern Philosopher, neighbors, police, quiet, Sarcasm, satire, Star Wars. Bookmark the permalink.

30 Responses to The House On The Hill Is Under Attack!