An Early Parole Means Making A Run For It 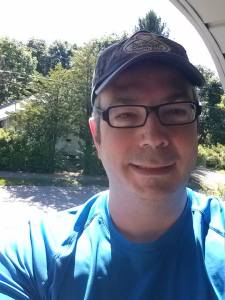 I haven’t been very good about running so far this year, Modern Philosophers, so I tried something new.

I decided to take the afternoon off from work so that I could go for a run.  I’m happy to report that I have put a slow, steady, and sweaty 3 miles under the belt of my Running Toga.

Luckily for you, I brought along my camera so that you could be part of this Summer Fitness Adventure!

I always look and feel so positive at the start of a run.  As you can see from this photo, I was in quite the chipper mood when I stepped out onto the porch of The House on the Hill.  Like a clueless teen in a horror movie, I clearly had no idea of the terrible fate that awaited me… 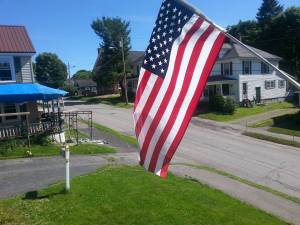 It was a gorgeous afternoon for a run.  This was my view from the porch after I’d made the EMTs aware that I would be out on the road.  Keeping a medical team on high alert is always a great idea when you run, Modern Philosophers.  Make sure they know your exact route, and do not deviate from it once you are out on the road. 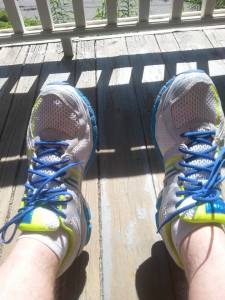 It was time to put these bad boys to the test.  I’ve been breaking in my new sneakers over the last couple of weeks, and today was my first time running in them.

As always, I remind you that “running” is a relative term.  I’m never going to win an Olympic sprinting gold, but I know how to work up a sweat and get my heart racing. 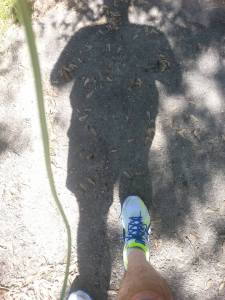 That shadow could definitely be thinner, so this was one small step for one large man… 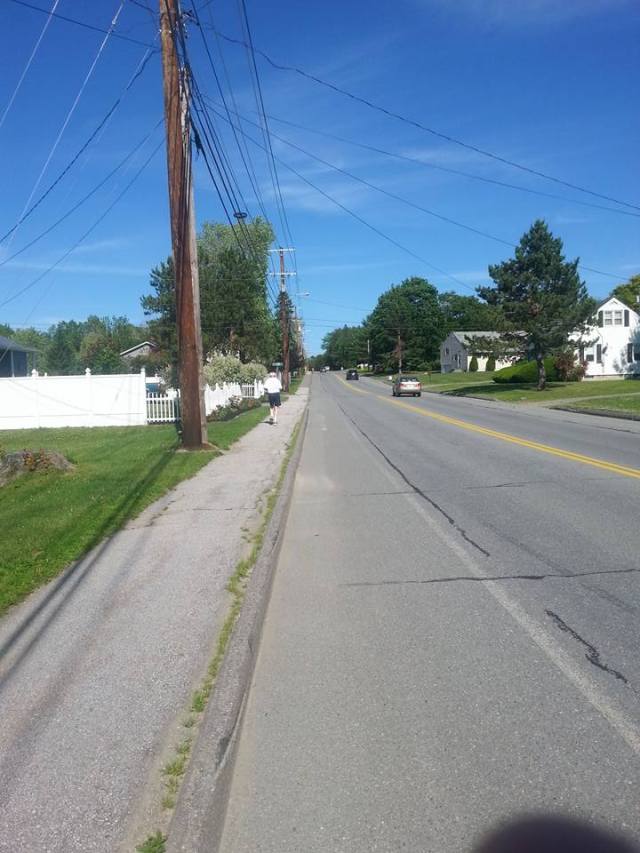 Nothing boosts morale more than realizing you are moving at a faster rate than a fellow runner.  It doesn’t matter if that runner is twice your age.  It still counts! 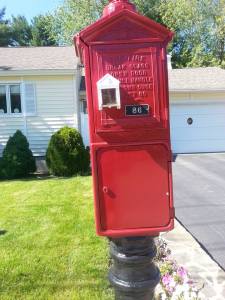 Always know the location of the emergency boxes along your running route, Modern Philosophers.  It does no good to have an EMT crew standing by if you have no way of communicating with them.

When I’m further along in my running routine this Summer, I’ll actually carry this emergency box with me for the length of my run.  It not only shows that I’m all about safety first, but such a feat of strength also really impresses the ladies… 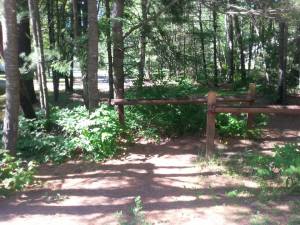 Don’t be tempted to run off into the woods, Modern Philosophers.  There are black bears out there, Wicked Witches with houses made of candy, and brain craving Zombies.  Lots of Zombies.  This is Maine after all. 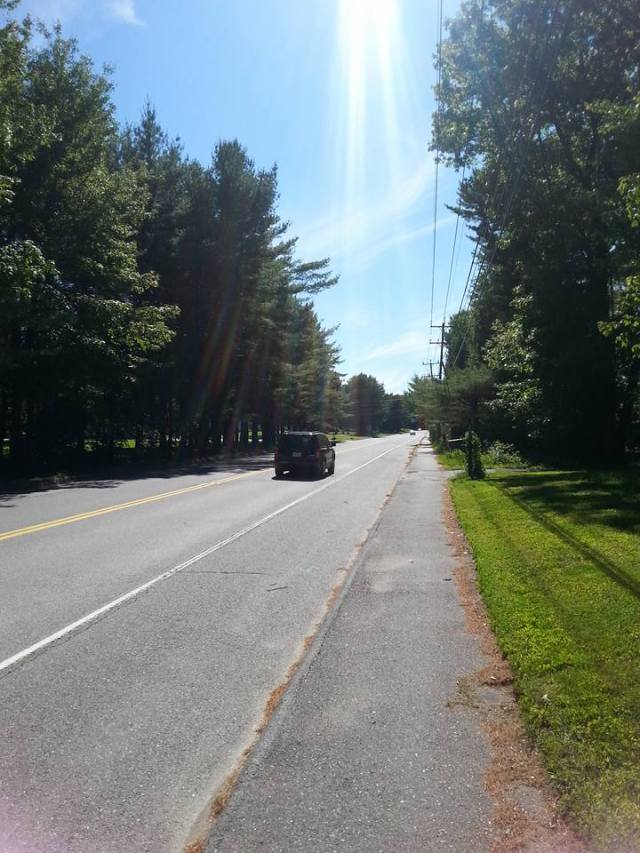 Look at the way the sun was beating down on the open road.  As much as I hate running, I definitely enjoy the view.  I definitely took the scenic route this afternoon… 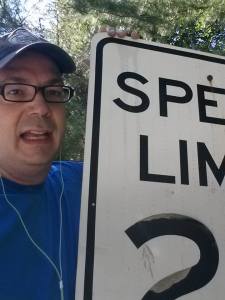 I was certainly not in danger of breaking the speed limit, Modern Philosophers.  This was my first run in a couple of weeks, and I was feeling it.  My lungs were on fire and my legs felt like they were made of concrete.

I promise that sign said the speed limit was 25mh, but even if it were 2mph, I probably would not have been speeding.  Hey…at least I was out there “running”! 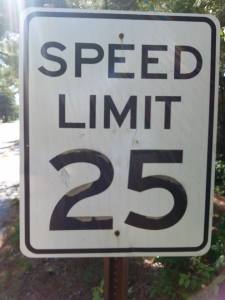 I knew you didn’t believe me, so here’s proof of the speed limit.  Why would I lie? 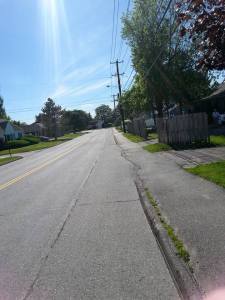 It’s impossible to tell, but this was an action photo taken while I was running.  It looks remarkably like the ones taken when I was standing still, so that should give you some idea of how fast I was moving at this point, which was about two and a half miles into my run. 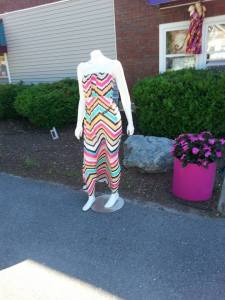 I met this charming young lady as I neared the home stretch, and the hopeless romantic in me had to stop to chat her up.  I did my best, Modern Philosophers, but I couldn’t get a peep out of her.  I told you I’m horrible at this dating thing… 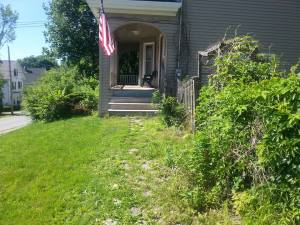 The finish line.  Finally.  The front porch of The House on the Hill pulled me in like the tractor beam on the Death Star.  It was good to be home. 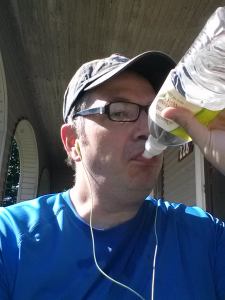 Always hydrate, Modern Philosophers!  I chugged that water much faster than I ran any leg of my 3 miler today. 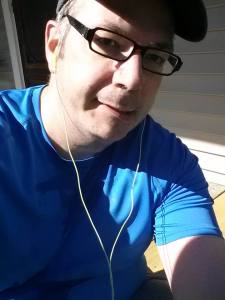 When you’re done, smile for the cameras and then let that runner’s high kick in.  Running is legal in all 50 states, and the high you get is the healthiest out there.

I definitely feel like I accomplished something today.  Leaving work early to go for a run is a great way to spend a Summer afternoon.  Give it a shot sometime soon…

Native New Yorker who's fled to the quiet life in Maine. I write movies, root for the Yankees, and shovel lots of snow.
View all posts by Austin →
This entry was posted in Fitness, Humor, Philosophy and tagged exercise, Humor, life, Maine, Modern Philosopher, photos, running, Sarcasm, satire, Summer, wellness. Bookmark the permalink.