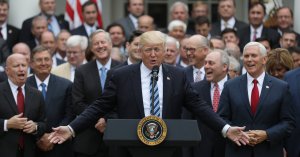 Apparently, President Trump and the Republican Party do not believe that everyone deserves to have a happy Valentine’s Day, Modern Philosophers.

The Republicans today vowed to shoot down Cupid’s proposed plan for Universal Love.

According to the plan set forth by the little archer in the diaper, love would be made available to all, free of charge.

The members of the GOP, which I’m assuming stands for Gang Of Partypoopers, said there is no way such a plan would be allowed on their watch.

“America is a country of freedom and independence, not socialism,” President Trump reminded everyone in a Tweet.  “Love is not a right.  It is a privilege, and wealthy white males get first crack at it.  Cupid can’t just demand that everyone gets love.  Free love was outlawed after the sixties, and it’s going to stay that way!”

Trump wasn’t done (Is he ever???).  “If we were to allow free love for everyone in America, even more illegal immigrants, drug dealers, and terrorists would pour into our country over the southern border, which the Democrats have refused to allow me to protect by denying me the money I need to build a much needed border wall.”

“These foreigners would duct tape our women, take all our chocolates and roses, and try to snatch up reservations at our finest restaurants on Valentine’s Day.  I’m never going to allow that to happen as long as I am President of the United States!”

Vice President Mike Pence even chimed in on the topic.  “Love should be according to God’s divine plan, and not forced upon us by a young man, scantily clad in a diaper.”

“I don’t care how accurate he is with his mighty bow,” Pence continued in a tone as bland as he is, “Cupid cannot go around making promises of love to every person who gazes upon his angelic face.”

The Vice President’s staff had to rush him off to cool him down with ice cold glasses of milk after that outburst.

Unfortunately, Cupid was not available for comment, as he’s too busy getting ready for Valentine’s Day.

Plenty of stuffy, uptight Republicans were willing to go on the record for this post, but the mere thought of listening to them caused me to fall asleep for almost two hours.

Luckily, there was a highly quotable Democrat willing to share his views on the Republicans’ opposition to Cupid’s proposal.

“It is unfair that the top one percent of our dating population gets ninety-nine percent of the best relationships available in our current romantic economy,” Bernie Sanders bemoaned the fate of America’s growing single population.  “The uber rich have their choice of trophy wives and mistresses, while also getting to burst into dressing rooms at beauty pageants.  Meanwhile, the average American has to resort to an awkward set up, or the use of online dating websites.  It simply is not far, and it’s time for a change!”

There’s no word yet on whether the Republicans are willing to approve Cupid’s proposal in exchange for money for a border wall, but even if they were, it seems unlikely that the Democrats would ever finance Trump’s dream project.

Love has never been easy, but something tells me it would be exponentially more difficult if the politicians got involved…