Lately, Modern Philosophers, I feel like I’m living in the chaotic days before the cataclysmic events that lead to the birth of the dystopian societies in so many of the movies and books that I enjoy.

I try to avoid watching the news because it’s so depressing and stressful, but I can’t hide from what’s going on in the world.  That then sends my imagination into overdrive.

I like to watch the late night shows, and Stephen Colbert and Seth Meyers both like to focus on politics.  Based on their comments and the clips they show from President Trump’s daily Coronavirus press briefing, which looks more like a propaganda rally than anything else, I’m really starting to worry.

I keep expecting Trump to issue an order that all Jedi be rounded up and imprisoned.  After that, he’s probably going to dissolve Congress and declare himself Emperor, right?

I’m sure he already believes he has the power to do so, and once the Jedi are no longer around to enforce the Constitution, he’ll be too tempted not to invoke that power.

I’m not sure who’s going to stand at his side as his Darth Vader, but my guess is Stephen Miller, who will rename himself Darth Hideous.  The guy looks like he was raised on the Dark Side, and he wouldn’t need to wear a mask to be scary.  Hopefully, however, he decides to go with the mask because the CDC has decided it’s best to wear one in public.

Emperor Trump with then eschew building his border wall to begin construction of the Death Star, which will be much more effective at keeping people from sneaking into the country.  I just hope he’s too busy tweeting about his new title and plans of domination that he doesn’t realize Dr. Fauci’s true identity.

After all, we need Dr. Fauci on the inside not only to sneak us the blueprints so we can figure out how to destroy the Death Star, but also to continue to give us accurate reports about COVID 19.

Help us, Dr Fauci, you are our only hope!

It’s not only Trump and his visions of grandeur that have me worried that I’m about to wake up in a dystopian future.

I’ve seen the reports about several states banding together to make pacts about re-opening the economy in their regions.  The Governors of those states have made it clear that they are the ones who can decided when to lift the Stay At Home orders, and allow businesses to open again.

President Trump does not agree with this, and he’s not going to be happy with these states for banning together to defy him.  Emperor Trump, once he fully embraces the powers of the Dark Side, is going to want to punish these groups of states in a way that will always remind them that they tried to stand up to the Capitol.

Do I sense the birth of the Hunger Games on the horizon?  Is the Reaping coming?

Parents are already stressed about having to home school during the pandemic, so how do you think they’re going to react when they find out that they have to stop teaching about the 50 States and learn all there is to know about the 13 Districts?

Geography and Social Studies are hard enough as it is, but how do you teach the subject when you’re not even sure of the facts yourself?  I do know that Maine is in District 13.  That District did not fair well at the start of things, but it did end up playing a key role in the uprising that saved Panem.

The only thing is, District 13 vanished from the map for decades.  Of course, Maine is cut off from the rest of the country by its horrific winters every year, so that won’t be much of a change.

But what about life in the other Districts?  If you think we’ve got it rough now being confined to our homes, not being able to socialize, and worrying about whether our stimulus checks have arrived, you are not going to be a fan of life in Panem.

You know how we’re all clamoring to have sports come back, but the only way that seems possible is if the athletes return to the arena without any fans in attendance?  We might not be able to go to the event, but we can all sit at home and watch the games. 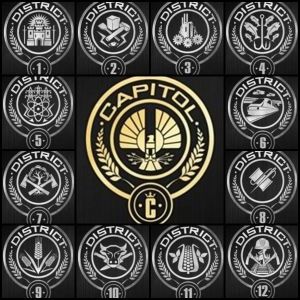 Does that remind you of anything?  Maybe the Hunger Games???

It is not looking good.  The streets are empty, millions are unemployed, the only people outside are wearing masks.

The main thing keeping this from being a dystopian future is the fact that it is happening in the present.

May the Force be with you, and the odds forever in your favor!

Remember, rebellions are built on hope.  So stay safe and keep the faith.  Maybe I’m just letting my imagination get out of control, and everything is going to be perfectly fine…

Do you see any other signs of dystopian societies from books or movies in these challenging times?